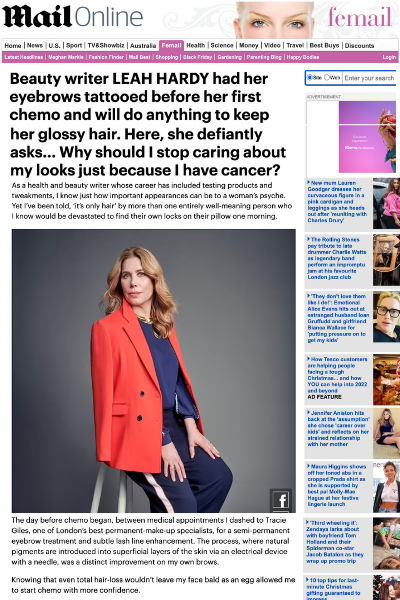 Beauty writer Leah Hardy had her eyebrows tattooed before her first chemo and will do anything to keep her glossy hair. Here, she defiantly asks… Why should I stop caring about my looks just because I have cancer?

As a health and beauty writer whose career has included testing products and tweakments, I know just how important appearances can be to a woman’s psyche. Yet I’ve been told, ‘it’s only hair’ by more than one entirely well-meaning person who I know would be devastated to find their own locks on their pillow one morning.

I’ve also been told ‘it will grow back’, which is true for the majority of women, but not all.

My entire approach to cancer has been to try to feel, act and look as ‘normal’ as possible throughout. Yes, first and foremost I want to live, but my appearance is a key part of my identity and I refuse to apologise for wanting to exert some control over all the physical changes that breast cancer brings.

It’s hard to imagine a disease that more effectively strips away our identity as women than breast cancer. For many, surgery takes away our breasts and chemo can steal every single hair on our body, even our brows and lashes. For a minority of unlucky women on chemo drugs called taxanes — and yes, I’m on one of those — this hair loss can even be permanent.

Some women don’t mind losing their hair, but most very much do. Around half of breast cancer patients cite losing their hair as the most traumatic effect of chemotherapy. Many said it was worse than losing a breast. More than a third of women in one study said they thought about stopping treatment due to hair loss and 8 per cent said they’d reject chemo for that reason. Women said losing their hair made them feel depression, shame, anxiety and lose confidence.

The day before chemo began, between medical appointments I dashed to Tracie Giles, one of London’s best permanent-make-up specialists, for a semi-permanent eyebrow treatment and subtle lash line enhancement. The process, where natural pigments are introduced into superficial layers of the skin via an electrical device with a needle, was a distinct improvement on my own brows.

Knowing that even total hair-loss wouldn’t leave my face bald as an egg allowed me to start chemo with more confidence.