Healthista | Looking for eyebrow tattoo removal? Here’s what you need to know

Home   /   Press   /   Healthista | Looking for eyebrow tattoo removal? Here’s what you need to know
« MailOnline | Sharon Gaffka questions if she would ever be ‘deemed pretty’ Healthista | Is an eyeliner tattoo the way forward for today’s modern woman? » 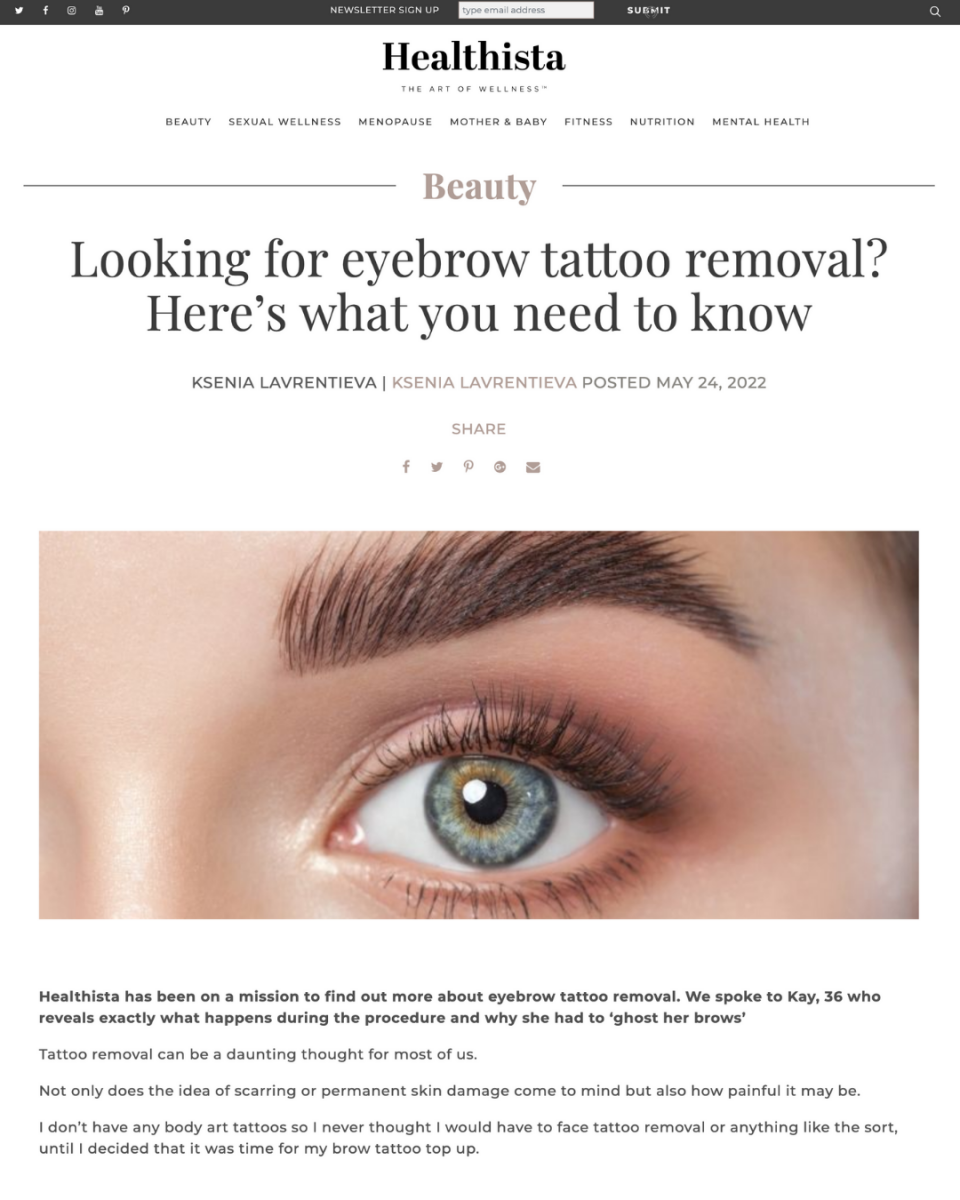 Healthista has been on a mission to find out more about eyebrow tattoo removal. We spoke to Kay, 36 who reveals exactly what happens during the procedure and why she had to ‘ghost her brows’.

Tattoo removal can be a daunting thought for most of us.

Not only does the idea of scarring or permanent skin damage come to mind but also how painful it may be.

I don’t have any body art tattoos so I never thought I would have to face tattoo removal or anything like the sort, until I decided that it was time for my brow tattoo top up.

As it’s been what seems like a decade since I originally had my brows microbladed – I recently discovered that there are newer more superior techniques when it comes to eyebrow tattooing.

‘With Permanent Makeup now so widely available in the UK and with the industry being largely unregulated, we are increasingly seeing more and more clients needing removal or correction for work undertaken by other clinics and salons,’ explains Tracie Giles, founder of Tracie Giles, Permanent Make-up and Aesthetics.

With her cherry-picked team, Tracie suggested that before I had her Hyper-Realism Brow Tattoo treatment, I would first need to rid of my old tattoo eyebrow pigment so that they were able to start with a blank canvas.

As the leading experts in Permanent Makeup – with an unmatched understanding of Permanent Makeup techniques, application and pigment science – the Tracie Giles London team have also trained extensively in Permanent Makeup Removal and are now the UK’s only clinic to offer a multi-disciplinary Permanent Makeup lightening and removal service either by their specialist British-built laser or liquid ‘fade-up’ solution depending on skin type, colour of pigment and depth of placement.

The technology is the gold standard ‘Q-switch’ laser. Where most lasers remove only black ink body tattoos, the super-advanced Q-switch laser combines bi-polar radio-frequency with intense pulsed light to specifically remove permanent make up and to safely break down colour, including stubborn browns and reds.

Tracie Giles’ state-of-the-art brow-ghosting laser can be used for:

All Permanent Makeup Laser Removal clients will first have a consultation with one of their PMU Removal Specialists where they will complete an in-depth analysis of the problem Permanent Makeup needing to be removed and discuss your beauty goals with you.

They will advise what is possible and create a bespoke treatment plan with you designed to reach your end goal.

Once the unwanted pigment is removed, they are in a unique position to be able to give their clients brand new brows by their world champion artists on a blank canvas.

Permanent Makeup Laser Removal uses a laser to break down the pigment within the tattoo. The laser emits short pulses of energy which are absorbed by the ink, breaking it down into tiny particles.

These tiny ink particles are then naturally removed by the body over time which causes the Permanent Makeup to continue to fade after each session.

I was a little worried about getting this laser procedure but knew there was no way around it and felt in the safest hands with the procedure being performed by the legendary Tracie Giles herself.

Tracie made me feel at ease straight away by explaining the treatment, the procedure, the science behind it and the technology step by step.

I was a little nervous as I was told that the heat of the laser may sting as it penetrates the skin with light, but Tracie reassured me that the procedure will be tolerable.

I was encouraged to try the first time without aesthetic to see if I’m comfortable with it that way, for those who are not so brave anaesthetic can be applied 30 minutes prior to the treatment.

Due to the treatment being so quick, it was over before it began. Remember there are no brownie points for going without anaesthetic so you can be sure it will be a comfortable procedure.

Some parts felt more tender than others, for example the beginning of the brows had more pigment so removing it felt more painful than the ends as there was less pigment there.

It felt like sharp, quick, beams of heat penetrating your skin and from time to time you will hear a rubber band snap kind of sound and that is when the laser catches the brows but this does not cause more pain, the sound is worse than the feel.

Overall the treatment took around 40 minutes, that included the initial consultation and patch test.

Tip – just breathe through it and think of something exciting! I was amazed by how quickly and effectively this laser had performed, removing most of the pigment, some of my brows turned white but I was reassured that this is only temporary.

I was told to come in for one more session to fully make sure all the pigment was out before performing the new hyper-realism technique.

‘My skin was back to normal so quickly’

Tracie placed some Crème Rescue and SPF over the brows and told me to reapply this four times a day for about a week.

You can use brow make up over the top if need be to feel more comfortable.

There was certainly no scarring, pain or damaged skin following the treatment and the slight redness went down in minutes!

I was strict with the after care and had no follow up problems as my skin was back to normal so quickly, that we even rescheduled my hyper-realism tattoo appointment for a sooner date.

I had to wait three weeks for my next session and then three to four weeks following this for my Hyper Realism Brow Tattoo.

The number of treatments generally needed varies from client to client and is dependent on a number of factors including skin type, pigment colour, depth of placement, desired end result, but typically 4 four to six sessions required.

You should not have this treatment if you have:

Prices for the initial consultation & patch test are £295 for clients new to Tracie Giles London. Existing clients will pay £120.
First session after consultation – Free
Per extra session as required – £120

« MailOnline | Sharon Gaffka questions if she would ever be ‘deemed pretty’ Healthista | Is an eyeliner tattoo the way forward for today’s modern woman? »