Healthista | Want bigger, more defined lips without the filler? Why not try a lip tattoo… 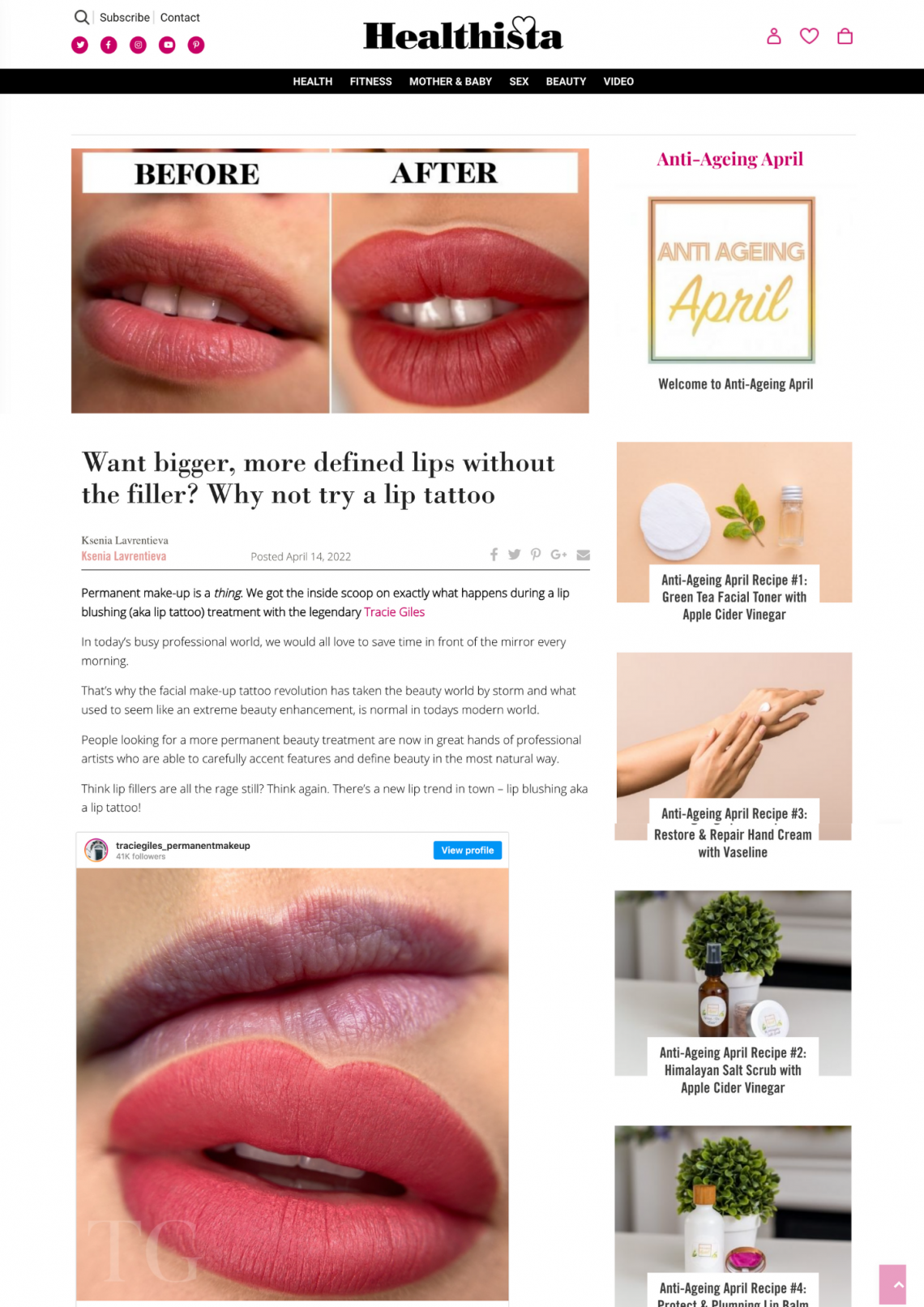 Permanent make-up is a thing. We got the inside scoop on exactly what happens during a lip blushing (aka lip tattoo) treatment with the legendary Tracie Giles.

In today’s busy professional world, we would all love to save time in front of the mirror every morning.

That’s why the facial make-up tattoo revolution has taken the beauty world by storm and what used to seem like an extreme beauty enhancement, is normal in todays modern world.

People looking for a more permanent beauty treatment are now in great hands of professional artists who are able to carefully accent features and define beauty in the most natural way.

Think lip fillers are all the rage still? Think again. There’s a new lip trend in town – lip blushing aka a lip tattoo!

According to Yelp’s 2022 Beauty Trend Forecast Report, lip blushing services are predicted to increase a whopping 130 percent next year.

Healthista decided to find out more and spoke to someone who has experienced it for themselves, 36 year-old Kay.

Kay had her treatment at the legendary global centre of excellence for Permanent Makeup & Aesthetics; Tracie Giles and her cherry-picked team of international world-class technicians.

Boasting with celebrity clientele the salon is situated in the uber luxurious neighbourhood of Knightsbridge, London.

Here’s what Kay had to say about the treatment…

I have always wanted to under-go a permanent make-up transformation, but the fear of what could go wrong had always prevented me from going through with it.

That was until I got to my mid-thirties and I realised that the use of lip, brow and eye-liner just didn’t cut it anymore.

As they say, ‘when the student is ready, the teacher will appear’ and Tracie Giles did just that.

The lovely technician Misha made me feel very much at ease. We went through the colour palette together until I was happy with the choices.

I ended up mixing three different colours to get the right balance of nude that was perfect for my natural lip colour.

As I lay comfortably (in anticipation), Misha started to carefully draw out my lip line so I would see how the liner would look. Misha then double checked if I was happy before the tattooing process began.

The first tattoo application commenced using no anaesthetic. Misha began filling in the lip line, starting at the corners of the mouth.

The needle on the outer corners felt like a tickling vibration, in fact, it almost felt relaxing. As Misha approached the centre of the lips the sensation was more intense but certainly bearable.

I’ve never had a body tattoo before and even though the lips are supposed to be one of the most sensitive parts of the body, I have a feeling the sensation is far less painful than with a normal body tattoo.

After Misha filled in my lip line, she then applied the anaesthetic and we waited for five minutes.

After the five minutes were up, Misha began filling in the rest of the lip blush. This was repeated twice with extra anaesthetic added in between.

Going over the inner lips, closer to the middle did feel quite tender to the point where my eyes started to water, but it was almost like a hay fever type of reaction rather than any pain.

Misha then assessed the work and made her final adjustments, making sure everything was perfect.

‘I was told the swelling will go down quite quickly’

I was told the swelling will go down quite quickly and the brightness of the lip blush colour would drop by 30 to 40 per cent after a week or so.

The aftercare kit contained a lip balm, facial serum and facial wash that is specifically prescribed as the ‘Crème Rescue after care‘.

‘My lips still looked natural, yet much more defined’

The compliments came in rolling following the procedure, I honestly couldn’t believe what a carefully lined perfection of a job Misha delivered

When the initial swelling went down from the lip blush treatment, my lips still looked natural, yet much more defined with the addition of youthful colour that was true to my own. It was just like my lips but better.

I felt far more confident waking up in the morning with my new partner and he was very much appreciative of my new fuller more defined lips that did not look like a puffer-fish.

I would recommend this to anyone who is tired of putting on lip stick repeatedly or doesn’t like the idea of lip fillers but still wants to enhance the appearance of their lips.

I would also very much recommend this to those who have lost lip definition with age. Having more defined, fuller lips does give a more youthful appearance and takes away the need for lipliners and lighter tone lipsticks.

Oh and please don’t worry about never being able to wear a different lipstick shade as you can still apply all your favourite lipsticks over the top.

Prices for Gloss & Go™ Lip Blush Treatment start at £595  – this includes your initial appointment and a complimentary retouch appointment when taken within 2 to 12 weeks.